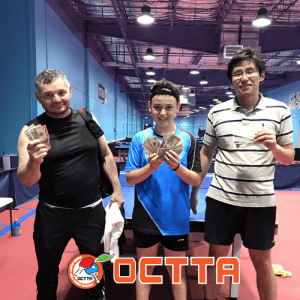 Our Saturday Round Robin was another great show last night!

Below you can find the recap.

In the Under 1500, we had 8 great players fighting until the very end. The final was between Nguyễn Khoa Cát and David (Dzung Mo chap Cat 2).

In the Under 2200, both semifinal were great matches. Kaili (San Diego penhold anti-Pip blocker and hitter) won over Zoltan 3/2, Vlad Fărcaș over Ivan 3/0.

This Set Up the Match of the Titans Final:

This finals matchup was one that any avid table tennis fan would have enjoyed. The reigning champ, Vlad was looking to defend his title.

As the challenger, Kaili brought a lethal combination that any player would have an extremely tough time playing against. He has a steady block and forehand smash helped carry Kaili comfortably in the first game.

The champ, Vlad, had no answer in the first game.

In the second game Kaili continued his momentum leading all the way up to 10-8. Frustrated with his performance Vlad started yelling to himself in his native tounge, Romani.

Whatever he may have said, it definitely worked.

Shaking himself out of his funk, Vlad came back with a fantastic deuce and stole game 2!

This was the turning point. Vlad found his rythmn and started to pour it onto Kaili. This new onslaught pushed Kaili into fatigue as Vlad kept barraging hime with long rallies. Vlad would end up taking game 3 comfortably.

Despite fatigue, Kaili was not giving up yet. With newfound spirit, he found his placement, strength and spirit in game 4!

This set up the 5th and final game.

Vlad played with so much control. His game was steady, smart, and pulled out many amazing saves.

These saves not only surprised his challenge but in the end would exhausted Kaili!

The 17 year old Romanian kid visited OCTTA 5 weeks ago and now has won all 5 weeks U2200 RR with each final series offering some exciting play!

He will be going home next week and train and comeback next year maybe 2600??

Good luck bro! You are always welcome here at OCTTA!

OCTTA Beginner's Tournament! Every Last FRIDAY of the Month. FREE SIGN-UP FOR ALL KIDS (6-18 Years Old)