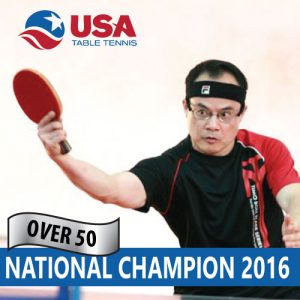 We have incredible news to share with all of our members. Dr. Tuan Dai Le, one of the founders of the Orange County Table Tennis Academy, won the 5-star USATT 2016 US Nationals Tournament for Men’s 50+ Singles in Las Vegas, NV. The tournament, which occurred over a span of six days from July 4th to July 9th, consisted of forty-nine players with USATT ratings ranging from 1,074 all the way up to 2,458.

Players flew in from Florida, Washington, Texas, Ohio, New York, California, and various other state for the opportunity to compete against one another and see who would come out on top among themselves. Prior to the tournament, our very own Dr. Le came in with the third highest rating at 2,298.

The tournament consisted of six single elimination phases that eventually led to Dr. Tuan Dai Le facing off in the finals against James Therriault. Because of Dr. Le’s higher rating, he was granted Bi round during the first phase of the tournament. He then followed by facing players from Pennsylvania, New York, Florida, Indiana, and finally James Therriault from Sacramento, California. In its entirety, the 2016 US Nationals saw 748 entries for a variety of different categories.

The results of the tournament can be found at: http://register.usatt.org/tournaments/results.php?ds=1